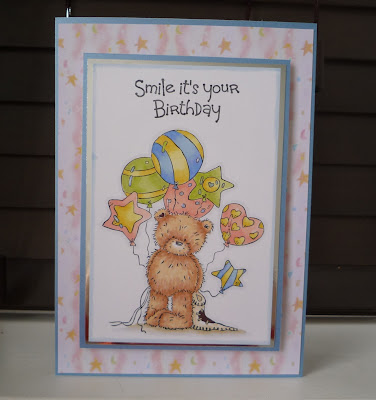 I really loved the Popcorn range when they came on to the crafty scene, and I lovingly collected every single stamp that came out. Sad to say though, they have sat in my craft cupboard untouched for a long time now. But, since my two great nephews came along, suddenly there was a very good reason to get them out again and this is a card that I made for the oldest's 1st birthday. 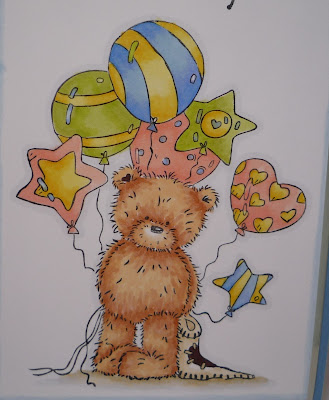 The original sets of stamps are pretty huge and, as a result, you can easily  fill up an A5 size cards without adding too much extra.

I had a lovely lime colouring this image in with my alcohol pens and using one of the lovely sentiments which came with the stamp. The lovely backing paper is also from one of my Popcorn CDs and as per usual, I picked the paper and then coloured my image to match it.

Well that's about it for this card except to say that there were some final embellishments added, after this picture was taken, in the form of sticky little chocolate finger prints and a little distressing around the edges from a one year old's new little teeth - lol!!

Here are some lovely challenges that I would like to enter today.....