Love in in the Air! 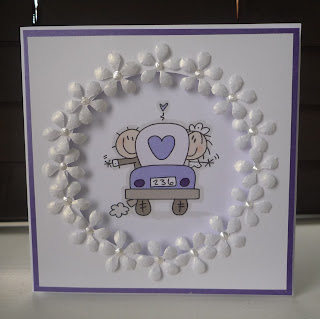 I don't often get to do wedding cards, but I have a friend who got married abroad and I wanted to make a card for them to receive when they got back. I wanted it to be a bit quirky, and have characters, but not soppy, so this image that I got from Bugaboo seemed just perfect for the job! 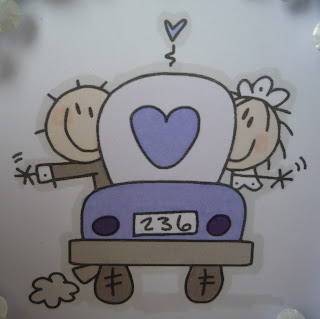 As you can see, the image is along the lines of Purple Ronnie or Diary of a Wimpy kid so it doesn't really want lots of shaded colouring, which means this took no time at all to colour up.

I then mounted it on the card and then put a circular aperture frame over it which I raised a bit using sticky pads.

Punched flowers using pearl paper made a  nice simple garland and I couldn't resist a bit of pearl paint for the flower centres.

For once the final card came out just as I had imagined it in my mind……always a bonus!

There are some lovely love challenges around this week, so here are the ones that I am going to enter:

Well that's all for me today. I hope you liked my card and thanks for visiting.

Sharon x
Posted by The Little Stamper at 04:02