My cards on Telly!!

Stamp Addicts have had 2 shows on Create and Craft TV today. The first one was at 10am (probably repeated later tonight) and there is another show at 3pm.

The shows feature the lovely Christmas stamp stes that we have been working on lately and I was so pleased to see one of my cards there on the screen when I flicked on the TV this morning!

To top it all, the thre cards of mine that were shown were all praised by the lovely Nigel, and I was so chuffed to hear that my Christmas scene card was Sarah's favourite example from the set. 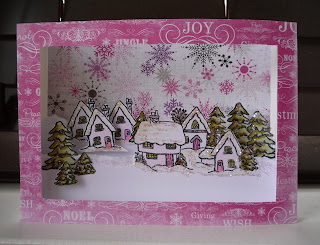 This is the card that was showcased as a favourite.......I can't tell you how chuffed I am!

It's also so lovely to see what amazing cards therest of the DT have come up with too.....I feel quite in awe of their artistic talents!

I will be recording the 3pm show to have a look at later, and get a bit more insipiration from the ideas that the other girls have come up with.

PS- I know I promised a 'non christmas' post, but I promise to come back with one later!!

Sharon xx
Posted by The Little Stamper at 03:38