Dreaming of the Sun, Sea and Sand once again....

Now that Christmas and New Year are over, I find myself dreaming of sunshine and sandy beaches and longing for some warmth once again. This time last year, we were getting ready for a big trip to Florida at the end of March and believe me, it came around as quick as a flash! Unfortunately there isn't any tropical holiday to look forward to this year so I will just have to keep my fingers crossed that we get a decent summer that arrives sooner rather than later!

In the meantime, I thought it would be nice to post a card with a little surf and a little sun (particularly after shivering away in my office all day as it is sooooo cold at work at the moment!) 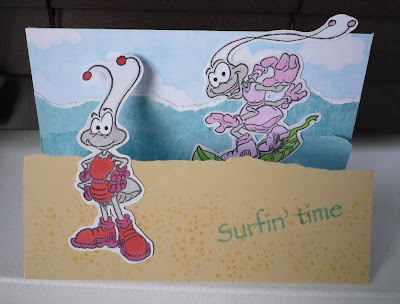 Here's a card that I made a few months back, ready for the release of the Stamp Addicts Surfung bugs set. A strange combination I know, but these guys are really fun and you can make them in to boys or girls which is really handy. This card appeared on one of the Create and Craft shows, so I was really chuffed about that!

This is a really basic stepper card and I have just ripped the bakcing papers to create the Sea and the Beach. The sentiment is also part of the set so really you have everything you need to create a really nice card.

Thanks for stopping by to look once again.

Sharon x
Posted by The Little Stamper at 10:51