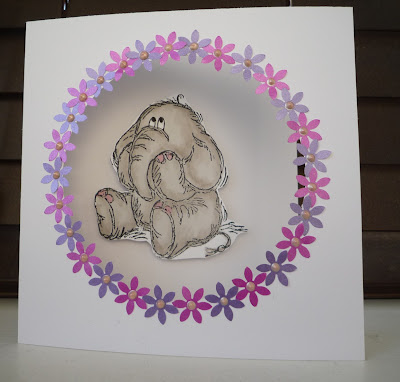 Sometimes it's nice to keep to something clean and simple, and after all those detailed Christmas cards it can be quite nice to make something which isn't quite so involved.

For this card, I have used the Elephant unmounted stamp from Stamp Addicts and coloured her in with promarkers. I then cut her out and mounted her centrally on the inside of my base card which I had previously cut an aperture in, using my nesties. I know that the ellie doesn't look particularly central in this shot but, trust me, she is when you look straight on! as a tip, the easiest way to get your image in the right position it to close the card and then look through the aperture to place the image - almost as if you are trying  to put your hand through the card itself.

As you can see, for the additional embellishment I have punched out lots of daisies in lovely pearescent paper and glued them around the aperture, finishing them off with a little dab of pearl paint.

Hope you like the card and thanks for stopping by to take a look.

Sharon x
Posted by The Little Stamper at 10:51