Today I thought I'd post a picture of my first attempt at a box card, which I made for someone who did something nice for my family. The recipient happens to like knitting and buttons so, I bought some buttons during my recent visit to Hobbycraft at the NEC and I thought it might be nice to make something to put them in. 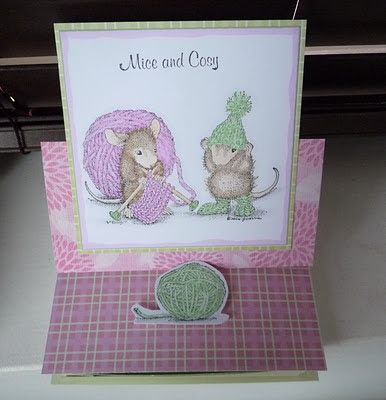 I had to photograph this one in a bit of a hurry, so apologies for the poor quality, but, as you can see, I have used a gorgeous House Mouse set which came from Joanna Sheen.

I thought that the wool balls may present some problems, colouring wise, but I was surprised at how easy these were to colour and shade as you can do it quite randomly and it still comes out looking pretty good. I simply used two shades of colour; coloured the lightest shade all over the ball first, and then added low lights by following the lines of the wool at the base of the ball and also on the stands which are'inside' the ball.

For the lovely little mice, I used the tried and tested Joanna Sheen recomended combination of Sandstone and Blush.

I think this is such a cute image - that little mouse trying on the hat really puts a smile on my face!

Thanks for dropping by.

Sharon x
Posted by The Little Stamper at 10:42