As mentioned yesterday, the nice people at Stamp Addicts gave me a set of stamps to play with, and challenged me to make three cards. Now the stamp set was slightly unusual, consisting on a hunter with a gun, a bull dog carrying an ammunition pack ad a duck in a straight jacket!

Hmmm - not something that I would necessarily choose (me being a cutie tootie kind of girl!) but, once inspiration hit, I had a great time with these stamps as they really are quite comical. 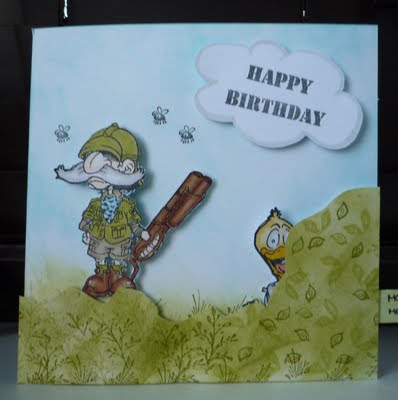 As you can see, this card features the hunter, looking for the duck, who is hiding behind the bushes!

All of the background, including the bushes are made with distress inks and I have used my Stamps by Judith stamps to create the brush and  the leaves.

But there's a little bit more to this card than meets the eye, as the duck also moves in and out of the bush - so here's a shot of him briefly out of hiding! 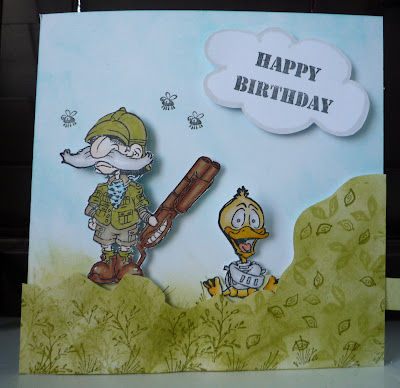 The greeting that you can see on the cloud, also comes with this stamp set and you can also have 'Have a Crazy Birthday' as well........quite fitting for the duck I think!

Have a nice Sunday, and hope you will pop back soon.

Sharon x
Posted by The Little Stamper at 06:43